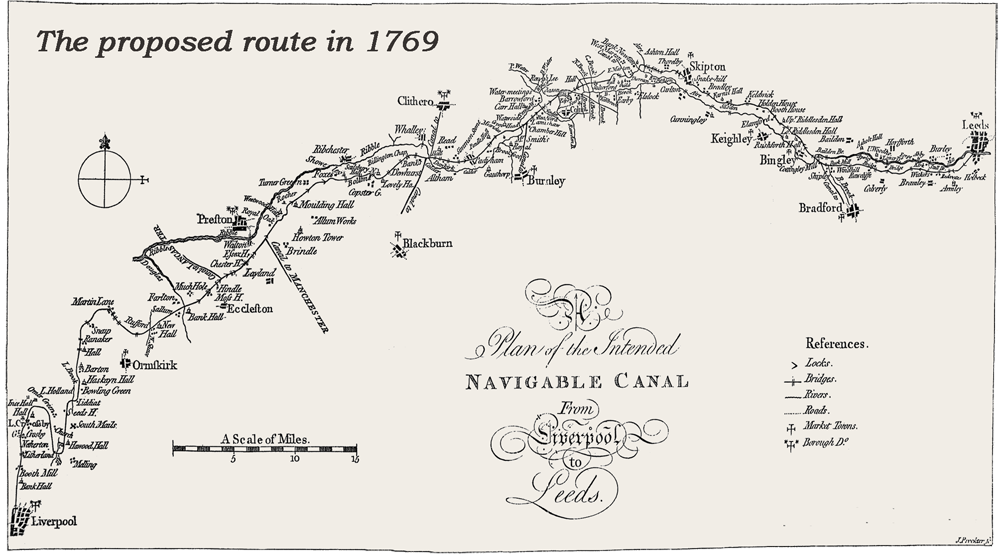 Marrying their respective requirements meant that in its most formative period there was almost constant discussion and disputation about the precise route that the Canal should take – something that changed even while the Canal was in the process of being built.  Once opened, to great celebration, the Canal proved to be a most successful venture for its early investors and continued that way for the next hundred years, despite the growing competition from the railways.

Gradual decline began after the First World War.  The closure of the Bradford Canal in 1922 was a particular consequence of the difficulties encountered in the City of the Canal’s origin, whilst at the same time being emblematic of the general pressures on the British waterway system.

The full story of this history is told elsewhere – particularly in Mike Clarke’s definitive book The Leeds & Liverpool Canal, where the more unique features of the Canal are spelt out.

In the middle of the 1700s, Yorkshire was a well-established woollen manufacturing area, while Lancashire's industries were still in their infancy.

Consequently, it was in Yorkshire that the canal was first proposed. In the 1760s the merchants there were keen to improve the supply of lime and limestone from the Craven district.

This they used to improve the fertilisation of agricultural land and to provide a mortar which allowed them to increase the size and height of buildings used for weaving. They also hoped to expand the market for their cloth by gaining access, via Liverpool, to the growing colonial markets in Africa and America.

Thus, it was in Bradford that the Canal had its origins.  The Bradford Canal Company was formally instituted at a meeting at the Sun Inn in Bradford in 1771.

This became the Leeds & Liverpool Canal Company and it was in Bradford that the Company offices were initially located (until 1850).

The route that was originally chosen was up the Aire valley to Gargrave, then through Padiham, Whalley and Leyland to Liverpool. They would thus have a fairly direct route to Liverpool as well as reaching the limestone country around Craven.

When the Yorkshiremen sought support in Lancashire they found that Liverpool merchants were more interested in acquiring a good supply of coal for the town from Wigan. They suggested a different route, through Wigan, Chorley, Blackburn and Burnley, joining the Yorkshiremen's line at Foulridge.

The two groups fell out over this, though they eventually agreed to a compromise. The Yorkshire line was to be followed, but there was to be a link to Wigan, with work starting at each end simultaneously. 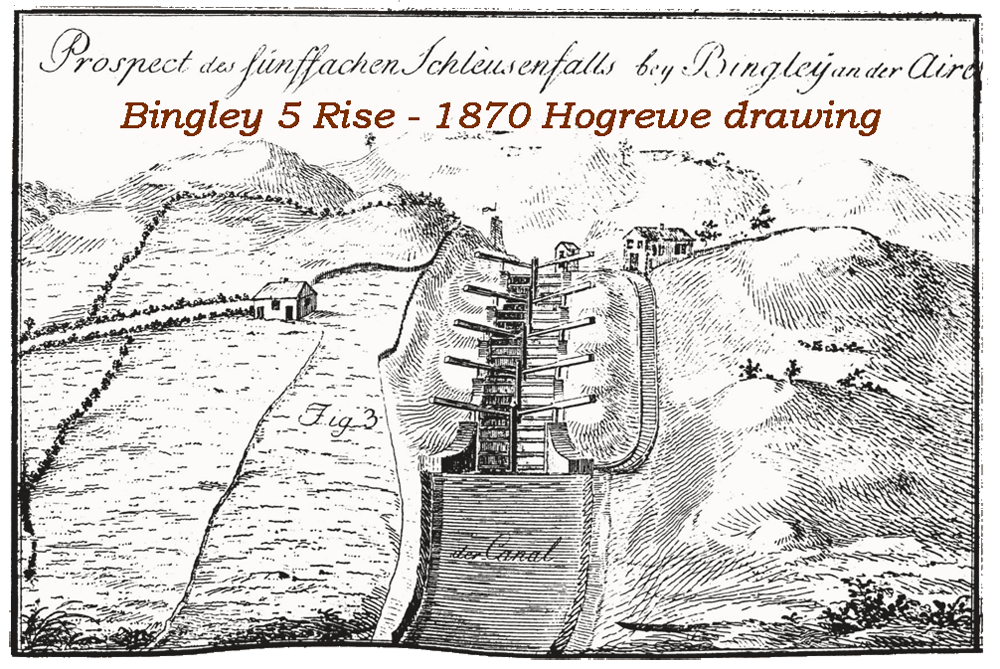 Work on the Canal started quickly and by 1773 the first section was opened from Bradford to Skipton.  By 1777, when the canal was open from Liverpool to Wigan and from Leeds to Gargrave, the company ran out of money.

Construction ceased until 1790 when the economy improved and more finance was available. By then East Lancashire was rapidly developing as an industrial area and the canal proprietors realised that there was a greater opportunity for trade around Blackburn and Burnley.

The proposed line of canal was altered and when it opened throughout, in 1816, it had been constructed along the route first suggested by the Liverpool merchants.

In fact, the canal was never really completed as between Johnson's Hillock and Wigan it uses the Lancaster Canal's southern section. (Control of this length was assumed by the Leeds and Liverpool from 1864.) 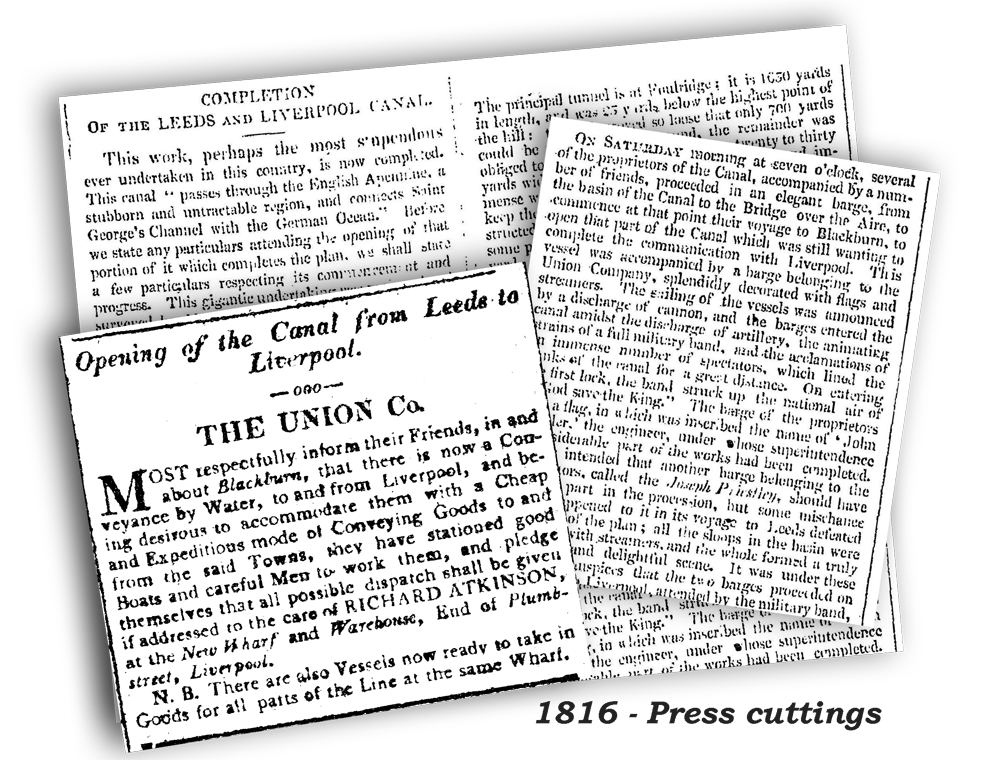 When the full length of the Canal, from Leeds to Liverpool, was finally completed the event was the occasion for great razzmatazz.  On Saturday 19 October 1816 one of the company’s barges set out for Liverpool together with one belonging to the Union Company.

The Leeds Mercury reported this in the following terms:

“..On entering the first lock, the band struck up the national air of ‘God Save the King’.  The barge of the proprietors bore a flag, in which was inscribed the name of ‘John Hustler’, the engineer, under whose superintendence a considerable part of the work had been completed.  It was intended that another barge belonging to the proprietors, called the ‘Joseph Priestley’ should have taken part in the procession, but some mischance which happened to it on its voyage to Leeds defeated this part of the plan; all the sloops in the basin were decorated with streamers, and the whole formed a truly animated and delightful scene”

This crossing was subsequently re-enacted by the Leeds & Liverpool Canal Society and the Canal & River Trust when the Society’s heritage boat Kennet led a flotilla of boats from Leeds to Liverpool in October 2016. 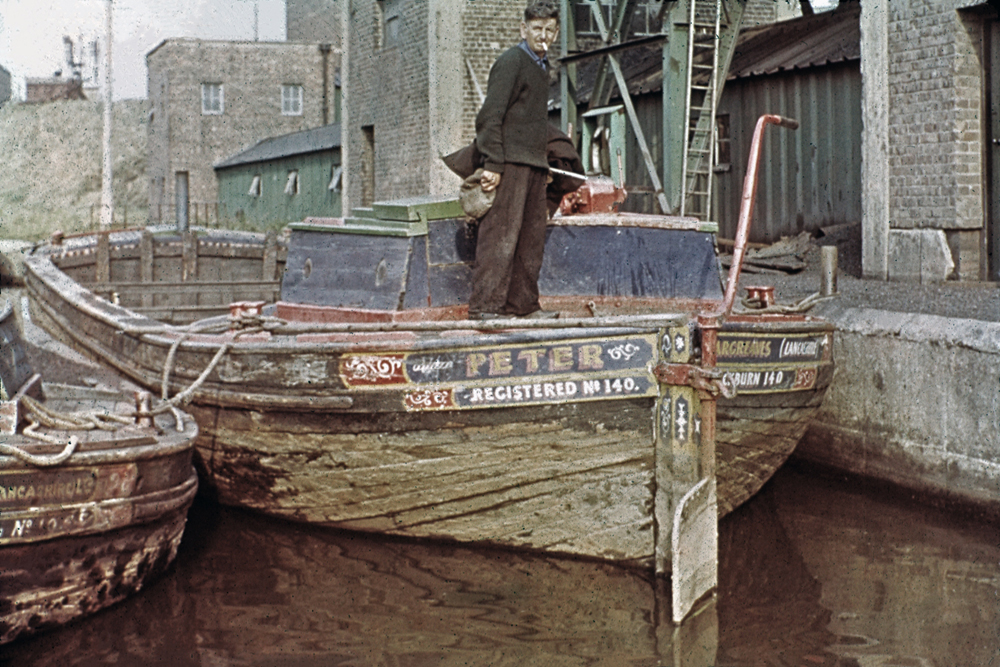 Although the primary connections, from Leeds and Bradford respectively to Liverpool, were now complete and a branch to the River Ribble via Rufford was in place, development of the Canal did not cease.

The Canal competed well against the burgeoning railway system for a hundred years. But following the First World War a gradual decline began to set in.

Ostensibly, the first clear sign of this was the decision to close the Bradford Canal. Although the Bradford Canal had had a chequered history, it had also previously been an important and very busy canal terminus.